Enter through the decorative iron gates that are more than a century old. Wind along the regal drive lined with craggy Norwood maples dressed in their rich autumn reds and oranges. Ahead on the hill is the Mansion at Noble Lane, a 25,000-square-foot luxurious resort and spa that is the dazzling new face of a forsaken post-Gilded Age estate with a curious past.

Historic buildings are precious containers of a region’s memory, haunted by their marvelous stories of another time. For every one that is lost, a piece of a city’s soul goes too. Ruin and loss are tragedies for historic preservationists—and special opportunities for visionary entrepreneurs, like Monique Greenwood.

What Greenwood and her husband, Glenn Pogue, have accomplished in assembling their resources to rescue and restore the once-magnificent mansion is proof of the adage that “no one loves an old house in vain.” Long-time residents of the area are ecstatic that this sorely neglected jewel from an opulent era in history is again shining brightly.

Having the vision
Constructed in the roaring 1920s as part of the F.W. Woolworth success legacy (see “Timeline” sidebar on page 5), the three-story, 70-room landmark building appeared on Greenwood’s radar, thanks to a friend who was absolutely certain that the former magazine editor had what it would take to breathe life back into it. “From the moment I saw it, I knew somehow I had to have it. It was at once majestic and magical,” said Greenwood.
She continued, “Of course when I purchased it, there were many who looked at me as if I had three eyes. But that third eye is the eye of vision. It gives the ability to see the possibility.”
But a “third eye” of vision must be matched with energy, determination and skills to accomplish the practical part of dreams. And Greenwood has proven many times to have those characteristics as well. The former editor-in-chief of Essence magazine wears the varied hats of mother, author, hospitality diva and hands-on innkeeper. She is President and CEO (which she says stands for Chief Enjoyment Officer) of Akwaaba Bed and Breakfast Inns, a company she owns with Pogue. It includes four other successful B&Bs: one in Brooklyn, two in Cape May, NJ and one in Washington, DC. 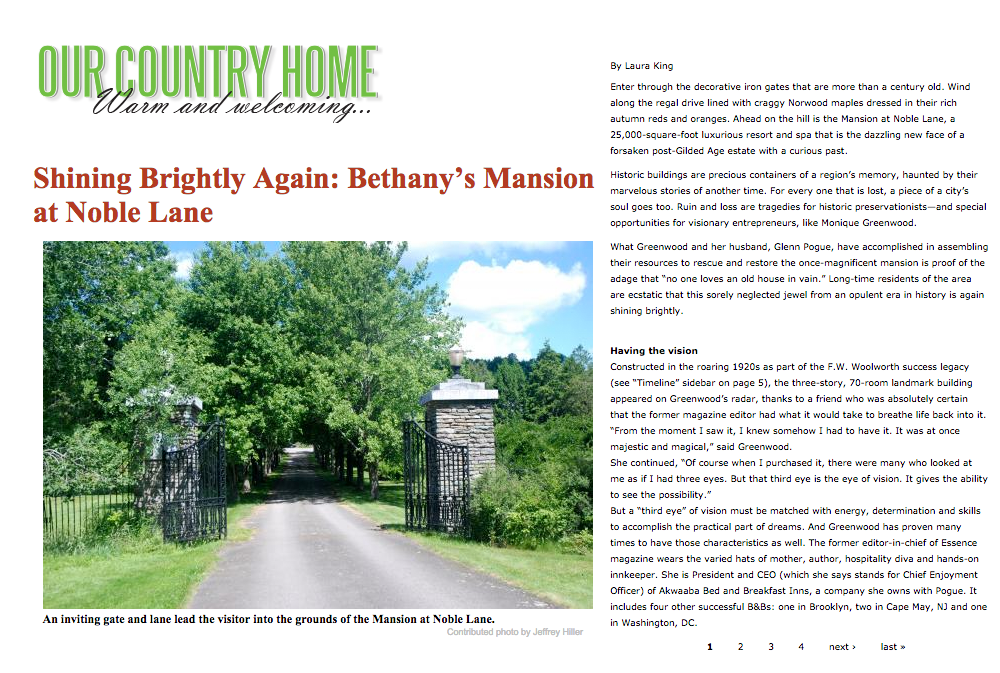